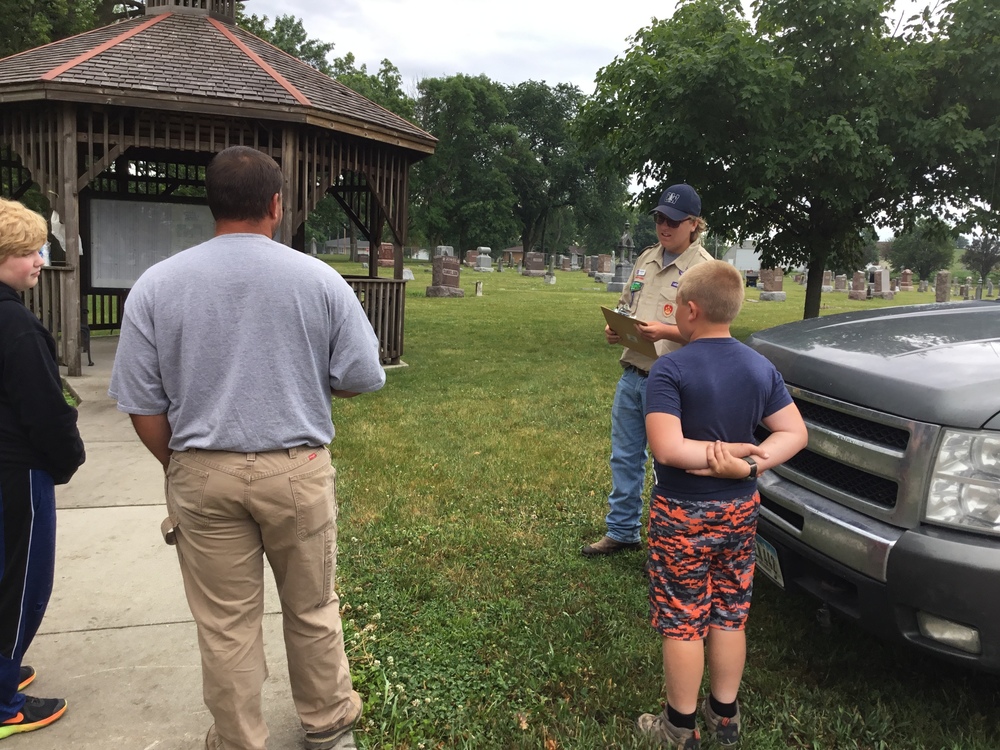 Brad Haglund has been proposing and planning his Eagle project since the fall of 2019.  On Sunday, June 21st, that plan finally came to fruition. His project was to straighten twelve headstones in the Wakefield cemetery.

Last November Brad met with Sandy Otte about the possibility of doing a project at the cemetery and Otte said there are many headstones that are leaning that he hadn’t had time to work on as sextant of the cemetery.

Haglund thought this would be a good project to help the community and decided to focus his attention on the old part of the cemetery because of the age of the headstones and there aren’t any survivors or descendants left in the area to provide upkeep to the stones.

Haglund identified many leaning headstones, but, identified 12 tombstones to straighten and include in his proposal.

He felt they could be straightened using basic tools such as long pry bars and shovels.

During this time, Brad asked Carol Clark if she would be willing to be his Eagle Scout Advisor for this project.

She willingly accepted and has given Brad a lot of support and encouragement and has guided him in the process. Carol has two sons that earned the rank of Eagle Scout.

The first step was to get approval for the project from the cemetery board and then the City Council. Haglund gave presentations to both groups during the respective December meetings.

With the support of both, he presented his proposal to the Troop committee and the district Eagle representative.

In March his proposal was approved and the planning process began.

Haglund had originally planned to start in April, but the Covid-19 virus precautions forced him to delay working on his project.

Jerry Nordeen of Monument solutions had learned of Haglund’s proposed Eagle project and reached out to him and offered guidance.

Haglund helped Nordeen in the Wayne cemetery and learned skills to make him confident in leading a crew for his project.

During this time he also decided in addition to straightening the twelve headstones, he’d also clean them with a special product Nordeen introduced him to.

In June the Covid restrictions were beginning to ease and Haglund had waited long enough. He assembled a crew of Scouts and adults and planned a start date of June 20th.

The Eagle project is not intended for the Scout to complete himself, but rather to assemble a crew to gain experience and confidence in leading others.

The project went faster than Haglund had anticipated and was almost complete the first day.

On Sunday, June 21, Brad returned with three adult family members to finish cleaning a few headstones and make a final inspection of the completed work.

Salmon enjoyed comparing the before pictures with the completed results. In addition to the twelve planned restorations, the crew restored three more headstones.

As with any project, there were some unforeseen circumstances and some headstones needed a different method of restoration than originally planned.

A stone that Haglund and his crew were excited about was one that had the bottom part of the stone obscured in dirt.

After some initial digging and removing the top half, the family name of Lundstrom was found as well as the decorative edging on top of the anchor stone.

The stone was totally removed from the ground. Six inches of pea gravel was placed in the hole and then the stones were replaced.

The next steps for Haglund include writing his project report and finishing his project notebook.  He will then present that to the district Eagle representative. After she approves, an Eagle board of review will be scheduled and held.

Upon passing the board of review, Haglund will officially earn the rank of Eagle Scout.

An Eagle court of honor can then be scheduled where he will officially earn his new badge of rank and celebrate with his Troop, family and friends.

“I am excited to try to complete the project before I start high school,” Haglund said. “I will still stay on as an active leader if I do get to Eagle Scout.”

He enjoys Troop campouts and going to summer camp and is now old enough to go on high adventure camps.

Haglund wants to go to Northern Tier in the Minnesota boundary waters and Sea Base on the south tip of Florida before turning 18.

“I really appreciate all of the support and encouragement the community of Wakefield has given me throughout my Scouting career,” he said. “I am happy to give something back to the community through this service project.”

A gravestone before it was worked on.

A gravestone after being worked on.