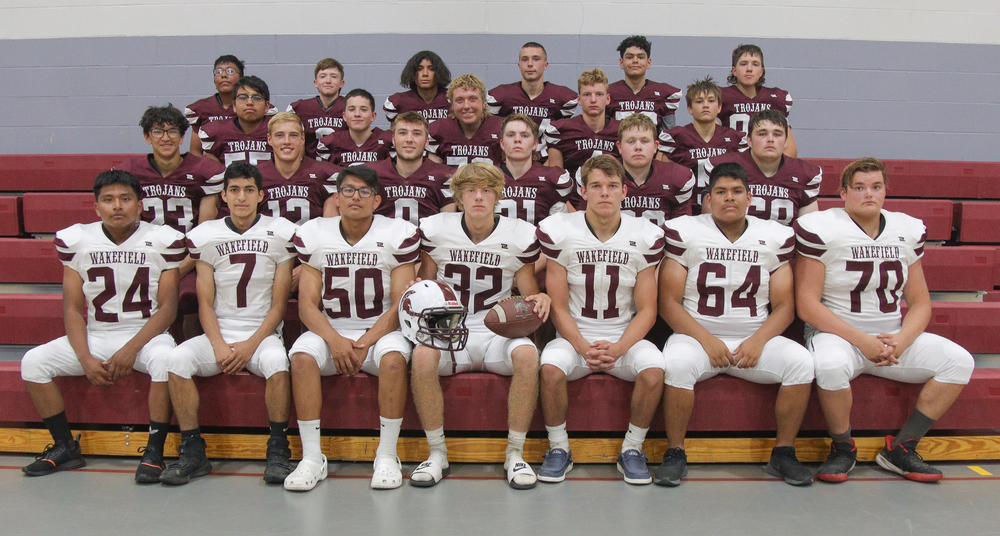 Trojans look to continue on field success in 2021

The Wakefield trojan football team has seen a bit of success recently and earned statewide accolades for their performance on the field for the past couple of season.

In fact, Wakefield has won at least six games over the past five seasons and completed an undefeated season in 2020 after losing a game in 2019 and a couple in 2018.

"When I took over as head ten years ago I had an overall vision of what I thought this program should be, it just took me some time to get the ship turned in that direction," Wakefield coach Mike Hassler said.  "I honestly believe we have a football team and a program that expects to undertake a somewhat difficult journey every August and by October, hopefully come out as a closer-knit battle tested group of young men - there have been some standards and expectations established in the last five years in the Wakefield Trojan Football Program that we believe every player wants to live up to over the course of their four-year journey."

Wakefield returns a couple of All-District players and six players to make a solid nucleus to keep the recent history and success alive.

Logan Bokemper and Gabe Lamprecht return from the the undefeated 2020 campaign and will be the mainstay for the Wakefield offense this fall.

Add probable quarterback, Cade Johnson, who had a great season last year as a role player and now to become a main cog, the Trojans are in good hands.

"I believe this group is no different than any other group before them," Hassler said.  "They will need to find their path, become their own team, and learn to triumph and fail as a team.  If we can do that, we are excited about the group of young men we have suiting up for this season."

Along with Bokemper, Lamprecht and Johnson, Hassler will look to Diego Martin, Jon Chinchilla, Walker Lundahl, Matthew Ladely and Kaden Kratke at various positions to keep the success of the past few seasons moving forward.

The Trojan schedule will number one, allow for a gauge and number two, make the new group of players come together immediately.

Wakefield will open on the road with always salty Guardian Angels Central Catholic in Beemer in week 1.

A home date with Wisner-Pilger followed by a trip to Stanton to play the Mustangs will follow.

A game at Eaton Field against Norfolk Lutheran High Northeast, and another with Plainview and a trip to Elkhorn Valley will follow to play the Falcons.

The final home game with Laurel-Concord-Coleridge and a trip to Hartington to take on Hartington-Newcastle will conclude the season.

"There are no gimmes on this season's slate of games.  It's going to be eight consecutive weeks of finding out what we are made of," Hassler said. "We open with some pretty tough teams and have several preseason ranked teams on our schedule.  I told the boys it's not where we start, but where we finish.  If we run the gambit of our schedule then there is no reason we shouldn't get the respect we deserve when the season wraps up."