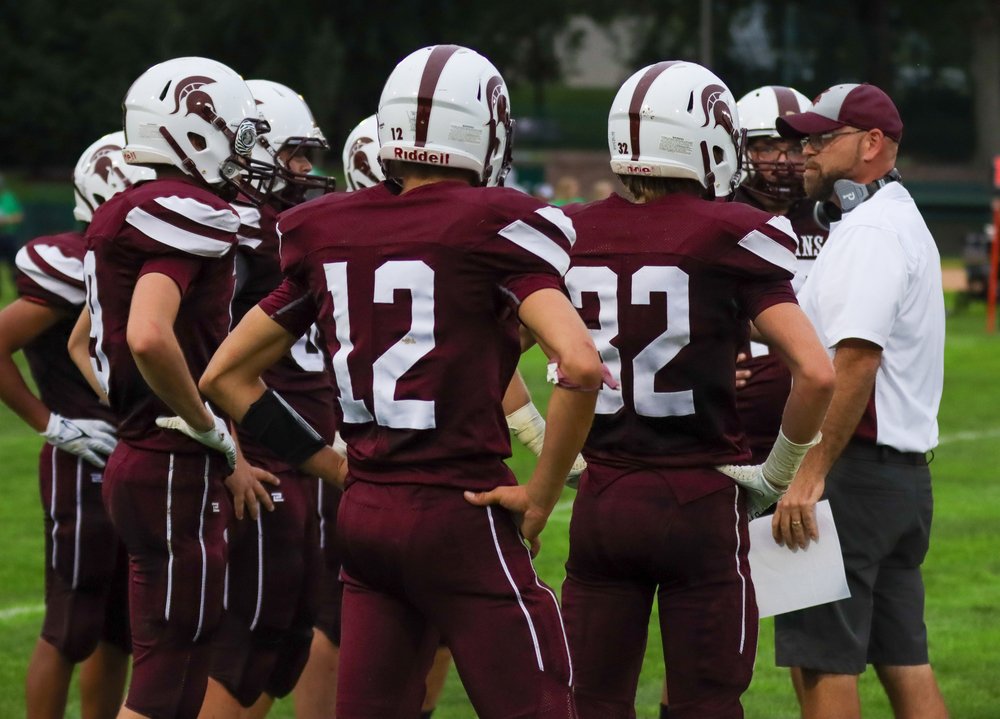 ​Gators take a bite out of Trojans

After annual romps over Wisner-Pilger for the past few years, including a 56-20 win for the Trojans last season, the Gators bit back this year and ran over Wakefield at Eaton Field in the Trojan's home opener - the last one scheduled for the 79-year home of the Wakefield Football, 64-32.

"Its pretty easy to say that we are disappointed.  Obviously I didn't have my boys ready to go, and I need to get that fixed, Wakefield coach Mike Hassler said.  "We came out flat, played with very little emotion, and I thought our effort was below the standard that we have set for ourselves and come to expect."

After losing a nail-biter last week to West Point Guardian Angels Central Catholic, 38-36, the Trojans had a miserable home opener.

"All the things I just mentioned require zero talent and I fully expect us to win every one of those areas over the course of a game, "Hassler said. "Instead Wisner beat us in every single one of those phases.  I know my boys are better than this.  I've seen the work they have put in.  I'm not going to hit the panic button.  I'm hoping what this was is an eye opener that we just can't show up on a Friday night and expect to have it handed to us."

"This is the second week in a row we have come out flat.  We rebounded at GACC for a great second half," Hassler said.  "Wisner-Pilger on the other hand, stepped on the gas pedal and never let up - there were definitely a lot of hard lessons learned."

Wakefield had defeated the Gators the past three seasons by a combined score of 168-54 and ruined a Wisner-Pilger back in 2018 with aq 50-8 win.

"Our inexperience up front showed.  Going from JV to varsity in the trenches is a big jump," Hassler said. "Wisner-Pilger game planned that well and threw a lot of things at our boys early that they weren't ready for.  By the time we got to half and talked it out we had already dug a hole."

The halftime score was 28-6 and Wisner-Pilger never looked back.

"I thought execution was better in the second half - the big thing is we have eight guys speeding the game up in their head and not trusting their technique or each other," Hassler said. "When you do that, you tend to cut corners, not run the play the way it is designed, and then it just snowballs.  We have to do better as a team and a staff of executing the game plan and trusting that everyone will do their job."

After the Gators scored a touchdown in the first 12 minutes, they ended up ahead 22-0 with just under eight minutes left in the second quarter.

A little over two minutes later, Wakefield finally put a drive together capped by a Logan Bokemper run from 10 yards out.

A Bokemper run failed on the conversion attempt and Wakefield seemed poised to get back in the game.

But an 18-yard pass from Gator quarterback Beau Ruskamp to Spencer Batenhorst with 10 seconds left on the clock before the break sent the teams to the locker room with the 28-6 advantage for Wisner-Pilger.

The second half started as badly as the first half ended as Ruskamp returned a Kaden Kratke kick 63 yards on the opening kick and the score ballooned to 36-6.

Bokemper would scamper 22 yards with 6:16 left in the third and ran in the conversion try to make it 36-14, but Wisner-Pilger would score twice before the end of thew frame to build the lead to 50-14 and begin the continuous clock with a 36-point lead.

Hunter Schultz grabbed a Cade Johnson pass with 7:37 left in the contest to halt the continuous clock then Johnson found Gabe Lamprecht with a conversion pass to get the Trojans to 50-22.

The Gators finished the scoring with a couple of touchdowns on another Ruskamp aerial with 5:35 left and a 1-yard run with no time left on the clock to account for the 64-22 final.

Defensively, Hassler realized the obvious, there is work to be done.

"It came down to trust and executing your job on the defensive side of the ball as well," he said.  "Early on we played tough, it usually just came down to one guy being out of position.  We were missing our assignments and doing the wrong thing or giving too much effort and trying to do other teammate's jobs as well as our own."

Wisner-Pilger ran for 319 yards on the night and finished with a total of 344 including Ruskamp's passing.

"When you have six guys doing their jobs that leaves two gaps open for the defense to exploit," Hassler said.  "That was the theme the whole night and Wisner-Pilger took advantage of it.  I need to get this defense on the same page and that's on me - I need to get these guys in positions where they just get to fly around and have fun.

Bokemper did have a fine evening running the ball with 26 carries for 123 yards and the two scores.

Johnson finished the night a very respectable 9-of-14 through the air for an even 100 yards.

Lamprecht grabbed a couple of Johnson's passes for 32 and the extra point, Schultz had four catches for 34 yards and a touchdown, Kratke caught one pass for 24 yards and Bokemper snared two receptions for six yards.

The sledding remains tough for the Trojans as Wakefield travels to state-rated Stanton.

"We have a big one this week," Hassler said.  "This is one of those 'play-off' type games I always talk to the boys about.

The Mustangs are 2-0 after wins over Omaha Brownell-Talbot and previously undefeated Laurel-Concord-Coleridge, which is now 2-1.

"Stanton is state ranked and without a doubt one of the best teams in our area," Hassler said. "I told the boys no one is going to sit around and feel sorry for them - we have to hit the reset button and figure out what kind of team we want to be.  We have six games left, we need to make sure we don't take any more of them for granted."

More pictures of this game can be found on the Republicans Facebook page: https://www.facebook.com/wakef...