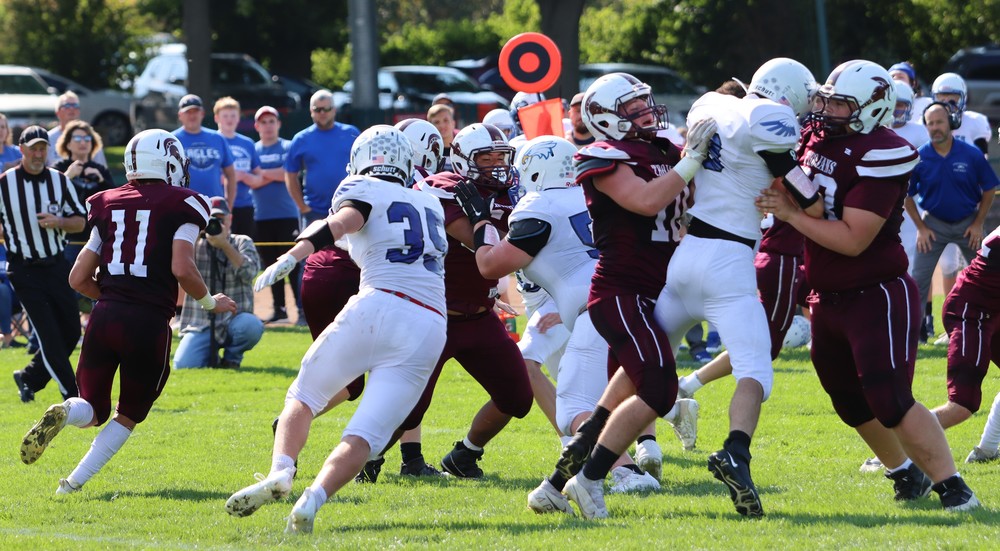 Norfolk Lutheran High Northeast turned away Wakefield for the first time in three years and did it emphatically in the first half.

Wakefield came storming back in the second half to make a game of it, but LHNE had already done the damage.

But the Trojans refused to go away.

"We kept going, Wakefield coach Mike Hassler said. "We wanted to make a game of it after they had gone up on us - and I feel we did."

After Lutheran High went up 28-6 in the opening half, the Trojans began a comeback for the ages.

"Obviously we are disappointed that we came up short on the scoreboard, but as a staff we are excited about the steps we took forward this week," Hassler said.  "We still have to work on coming out with more energy and having a little more of a killer instinct - I think once we settled down and realized that we could stand toe to toe with them, our execution picked up and we played some really good football in the second half."

Landon Jonson found Cort McKeown from 10 yards away before Lutheran High got busy making it a game the Trojans would have to respond to get to the win column.

Wakefield responded early in the third frame with a score from a five-yard scamper from quarterback, Cade Johnson.

Johnson scored on the run but the Wakefield quarterback made plays through the air to keep his team in the game.

After Lutheran High went up by a couple of scores early Johnson found freshman, Hunter Scultz to make it 16-6 with under a minute left in the first quarter.

"We just want to win," Johnson said. "I can help make that happen, which we're getting there. I will help us do just that ."

Johnson made it happen through the air, on the ground and on the other side of the ball with 23 tackles.

Ranslem scored a couple of additional touchdowns in thew second quarter to make the 28-6 halftime score.

"We are still giving up too many points, a lot of that boiled down to being out of place and not executing our assignments," Hassler said. "LHNE took advantage of some of our schemes and definitely exploited some of the things we do defensively - we had to tweak some fronts and coverages, once we did that I thought the boys played a real solid defensive game from about the end of the 2nd quarter on.  That second half was our best defensive half of the season."

Johnson scored with the run early in the third but the Eagles answered with another Ranslem run, his fourth of the game.

Logan Bokemper got things going from there as the Wakefield senior found the end zone from 41 yards away and after Gabe Lamprecht hit Johnson for a conversion pass on a throwback, to make it 34-20 with just over three minutes left in the third frame.

Schultz grabbed another Johnson aerial from 11 yards away then Johnson hit Bokemper for the conversion 34-28, with just under six minutes left in the game.

Ranslem scored his fourth touchdown for LHNE and Wakefield began a rally.

The Trojans came up with a frantic rally at the end of the game, scoring a couple of touchdowns within 14 seconds, but Lutheran High had taken care of enough business before to come away with the win.

A touchdown by Bokemper with a little over a minute and 40 seconds left, an onside kick and thirteen seconds later a Bokemper 37-yard run and the Trojans were making Suckstorf nervous.

"They (Wakefield) have beaten us the past three years," Suckstorf said. "We had to work to win this one but it is what we expected. Now we move along to the rest of the season and play another great team next week in Elkhorn Valley."

Johnson was 13-of-21 for 155 yards and a couple of touchdowns. Bokemper ran for 132 yards and three scores, Johnson had 87 and one touchdown.

Schultz had a great game with 111 yards receiving, including the pass from Johnson.

Johnson's 23 tackles led Wakefield along with Gabe Lamprecht's 18, which included a tackle-for-loss and a sack and Bokemper's 14 tackles.

The Trojans will take on Plainview at Eaton Field on Friday at 7:00 p.m.

"Plainview is a lot like us - they are young and have played some tough early games," Hassler said.  "They are extremely aggressive on both sides of the ball, so we need to focus on coming out and matching that as that has definitely been one of our weak points this season - we are hungry for a notch in the win column and will need our best week of practice if we hope to accomplish that."