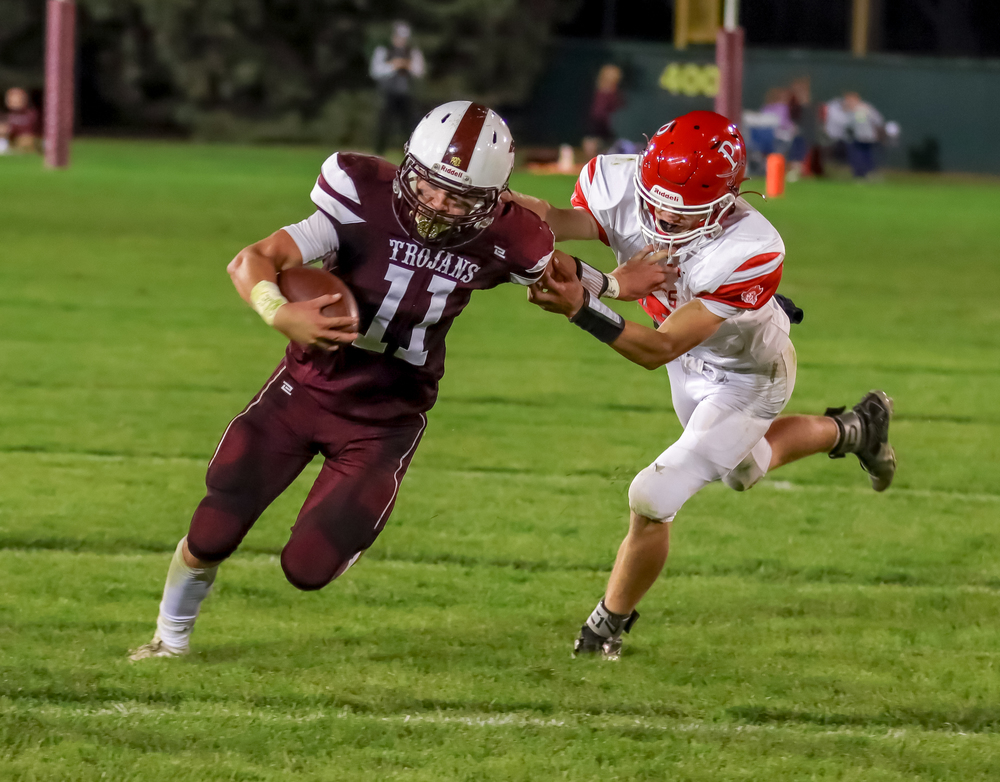 Wakefield used a huge fourth quarter to overtake Plainview Friday night at Eaton Field turning back the Pirates 82-62 after trailing 62-52 heading into the final quarter.

Logan Bokemper and the Trojan offense had a night-of-nights as Bokemper rushed for nearly 300 yards and scored 11 touchdowns - add four, two-point conversions and Bokemper placed his name in the Nebraska High School football record books with 74 total points in the contest.

"After the game, Coach Wendte let me know that Logan had rushed for ten touchdowns and returned another for his eleventh, I was a bit floored," Wakefield coach Mike Hassler said. "As an offensive play caller, you are never concerned with who is doing what, your job is to get the ball in the endzone."

Bokemper finished the game with 283 yards rushing and 112 yards returning kicks, including a 65-yard kickoff return for one of his 11 scores in the second frame.

The points in a game record was just set last week by a player from Palmer.

"I'm happy for Logan, he has put in the work over the four years in our program to put himself into a position to succeed, but I'm even more happy for our team because it took a lot of people to put him into that position to have a night for the history books," Hassler said. "It definitely made the win a little more special for all the boys."

Right on his heels was Trojan quarterback, Cade Johnson, who finished with 219 yards on his 22 carries as Wakefield amassed 502 yards on the ground.

"Several times Cade had real long runs where he was a bit gassed after the run," Hassler said. "So Logan naturally got the next run and punched it in. Those two really complimented each other the whole night, you couldn't focus on stopping just one, Logan just got to be the beneficiary when it came to crossing the goal line."

Offensively, Hassler was happy for the win.

"It's definitely not how I pictured it in my head, but we will take a win anyway we can get it," this season," the coach said. "Slow starts continue to haunt us, especially on the defensive side of the ball - we had a couple bad breaks early, which it took us a bit to move on from."

And, eventually his team seemed to grasp the message and made the big comeback.

"I keep telling the boys to turn the page, there is nothing you can do about it - after a spirited half-time discussion, I'm so proud of the way we came out of the half-time. It was night and day. Everything that went wrong in the first half, fell into place for us in that second half. This group of young men earned this win, I'm happy for them."

"When you don't punt and have over 500 yards rushing there isn't a lot you can pick at. Cade and Logan ran tough all night, but where it started was up front. Our young men up front by far had their best game of the season," Hassler said. "Every week Matt Ladely, Jon Chinchilla, and Walker Lundahl have continued to make strides and Kaden Kratke and Caleb Chase did a good job of blocking out on the edge from the Tight End positions - outside of some early self-inflicted setbacks, we pretty much ran the ball where we wanted because of those young men. I'm happy to see the work they have put in pay off for them."

Plainview had plenty of offensive fire power as well as Pirate quarterback, Tanner Frahm threw for 424 yards on 27-of-44 attempts for six scores, keeping his team in the game until Wakefield shut the door in the final 12 minutes.

"These high scoring games are hard on me as I pride myself on my defensive game plans," Hassler said. "First and foremost, I have to tip my hat to the Plainview quarterback, he made throws for the first two and a half quarters that I don't think I've ever seen a high school kid make - there were a lot of times we had good coverage, but he just made a better throw."

But the Trojans kept after it, and eventually took over the game.

"We just told our kids to keep playing. I felt at half we were starting to wear them down," Hassler said. "We really just made a few small adjustments and got a little more aggressive with our blitzes, which really paid off in the fourth quarter. Absolutely not happy with the 54 first half points we gave up, but pretty darn proud with the eight we held them to in the second half."

Plainview finished the first quarter with a 28-22 advantage, the second with 54-36 lead before Wakefield took over after the intermission.

The Trojans outscored the Pirates 16-8 in the third and took the lead for good in the fourth with a 30-0 advantage to take the win.

Defensively, Bokemper made 15 tackles; Johnson had 13; Diedo Martin had 11 with five tackles-for-loss and a pair of sacks; Kaden Kratke recorded six solo tackles along with two sacks and a fumble recovery.

Next on the schedule for Wakefield is a trip to Tilden to take on the 0-5 Falcons on a rare Thursday night game, September 29.

"We need to continue to take those positive steps forward," Hassler said. "The challenge this week will be to put together four quarters on both sides of the ball. We need to get out of the gate with more emotion. That will definitely be the focus in a short week leading up to Thursday night's game in Tilden."

More pictures from the game can be found on the Republicans Facebook page: https://www.facebook.com/wakef...