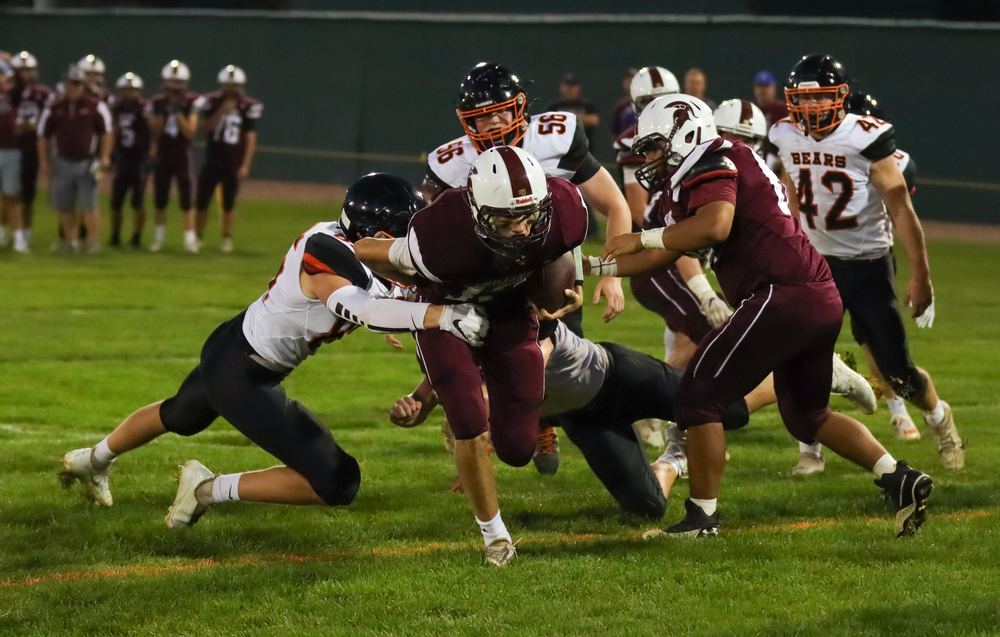 Wakefield ran up and down Eaton Field here Friday night, wearing out the grass, but it was Laurel-Concord-Coleridge that came away with a 64-46 win in the Trojans' last game after 79 years of football at Eaton Field in Graves Park.

"I couldn't be happier with the effort put forth by our boys.  We had kind of a rough week leading up to the game and found ourselves down quite a few starters on the defensive side of the ball," Wakefield coach Mike Hassler said.  "That definitely isn't ideal when you are going up against a state ranked opponent the caliber of LCC.  I feel like a lot of teams would have used that as an excuse."

What the Trojans did was give that state-rated team, the Bears, all they could handle but fell short by the 18-point deficit at the final gun.

"I felt like our staff put together a good game plan and the boys did one heck of a job executing it," Hassler said. "In the end we were just out manned, but we definitely didn't come up short due to our attitude and effort."

In fact, Wakefield won nearly every statistical category in the game but came up a little short.

"The game plan was to get first downs and grind clock," Hassler said.  "LCC had given up 54 points all year coming into the game, so we knew big plays would be hard to come by -we just felt like if we could fight for every yard and grind out first downs that would help shorten the game and keep LCC's high powered offense off the field."

And the plan nearly worked.

Late in the opening quarter, Wakefield's Cade Johnson dashed a couple of yards for a touchdown to make it 6-0.

The Bears would score back-to-back touchdowns to end the frame to take a 14-6 lead into the second 12 minutes.

Logan Bokemper and the Trojans answered early in the second with Bokemper crashing in from the one, and after Johnson stuffed in a conversion run the game was tied 14-14.

"I honestly don't think we could have executed the game plan any better than we did," said Hassler. "When you put up 464 of total offense and control the ball offensively for 37 of the 48 minutes in the game you can't do a whole lot of complaining -the o-line had to fight like heck and just gave us some creases and Cade and Logan did a great job of running tough behind them."

Bokemper would finish the night with 219 yards on his 38 carries on the ground while Johnson finished with 104 yards on an even 20 carries.

"On top of that I thought Cade threw an excellent ball all night and the LCC 'D' had a hard time containing Hunter Shultz on the perimeter," said Hassler.  "Hands down our best offensive performance of the season, I'm so proud of what those guys did."

Johnson also finished 8-of-12 passing for another 125 yards, Schultz caught nine passes for 132 yards as Bokemper completed 2-of-4 passes for an additional 13 yards.

Defensively, the Trojans limited a high-powered LCC offensive attack, but again fell short in the end.

"Early on I felt like we were at least making them earn it, but being down five starters on this side of the ball was just too much to overcome - we had a lot of guys playing different positions and we tried to blitz a lot more, which we don't typically do," the Coach said. "Give LCC credit, they have a great offense, and the Haisch kid is the best back we've seen all year - we knew it was gonna be a tall task, we were just outmatched on the defensive side of the ball."

Haisch would end up with 249 yards and seven touchdowns in the game.

Wakefield will end the 2021 campaign on the road with a trip to Hartington to take on the 3-4 Wildcats.

"It's our last game and we know it - the whole season has been about getting to this point and being able to look in the mirror and know that we did everything possible to improve ourselves," said Hassler.  "Hartington-Newcastle probably needs this game for the play-offs, so we will get everything they have.  We get to strap it up for one more week, I expect to see nothing but our best come Friday Night."