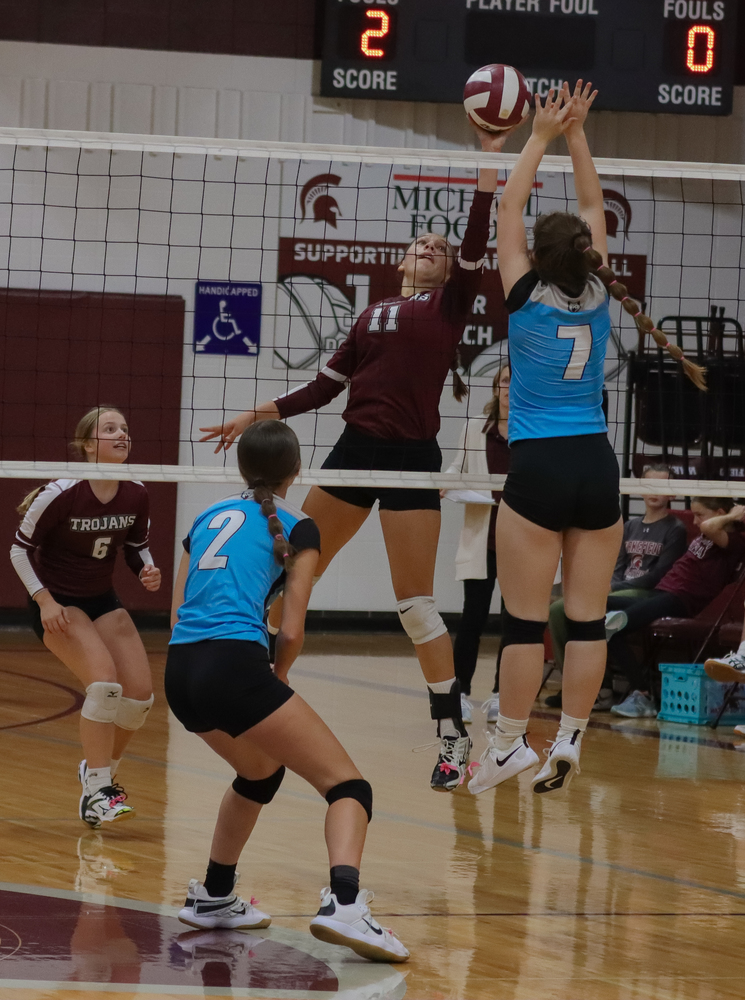 The Wakefield Lady Trojans advanced to the semifinals of the Lewis & Clark Conference Volleyball Tournament.

In the semifinals of the tournament against Ponca, Wakefield seemed poised to grab its own ticket to Tuesday's final.

The Lady Trojans battled state-rated and conference runner-up Ponca to a 21-25, 23-25 loss, but not before they made a mark about where they are headed for the rest of the season and the near future.

After dropping the opening set in the semifinals to Ponca, it appeared the match was over with Ponca up 22-10, but Wakefield came storming back.

Daveigh Munter McAfee rolled a winner off the tape on the net , Katie Borg hit an ace serve, and Alex Arenas slammed a winner to make it 22-13.

Arenas would hit another kill off the Ponca block then hit a rocket down the sideline to make it 22-15.

Not being ready to settle for the defeat, Arenas hit a tip-kill forcing Ponca coach Jessica Templeman to call timeout.

Gracen Evans would answer with a kill for the Lady Indians but Wakefield came back in a big way.

So, there was still a chance.

Wakefield got in the net to make it 24-19 but a Ponca hitting error, a couple of ace serves from Olivia Donner and a kill from Arenas off the tip forced Templeman to call another timeout with the score 24-23.

Unfortunately, out of the timeout, Evans hit another winner and Ponca traveled home to host the conference finals while Wakefield traveled to Ponca for the consolation game.

"We wanted to be in a different game, but we played what was before us," Wakefield coach  Brittany Eisenmann said. "We were right there but just fell short."

In the consolation game in Ponca, Laurel-Concord-Coleridge turned the Lady Trojans away and sent them to a fourth-place finish.

More pictures from the game, as well as Wakefield taking on the Wolfpack can be found on the Republicans Facebook page: https://www.facebook.com/wakef...