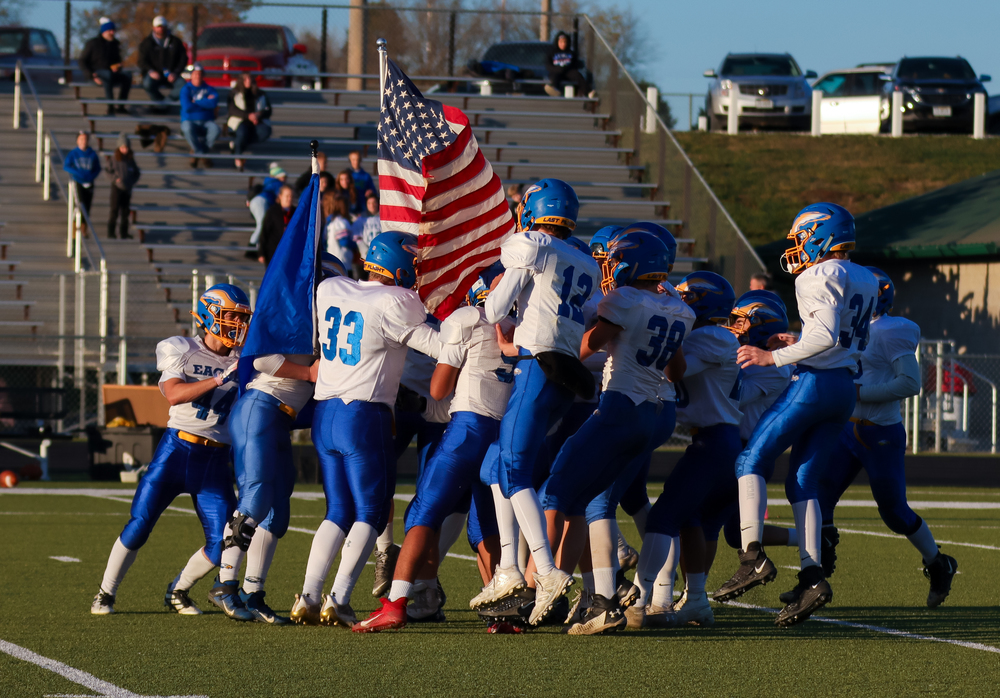 Despite a great effort by the Allen Eagles in the opening round of the Class D2 Football Playoffs, the final game for the  Eagles came at Humphrey St. Francis on Thursday night.

As lop-sided as the score may show, it was never a total domination by the top seed over the Eagles.

A handful of big plays at inopportune times, as well as three consecutive Eagle drives stalling inside the St. Francis 15-yard line spelled doom to the Allen squad.

St. Francis scored on its opening drive which consumed over half of the first period.

Tanner Pfeifer scored from 1 yard out on a fourth and goal to put the Flyers up 6-0.

Allen could not find the initial first down of the game on the first possession of the second period, and St. Francis quickly struck again on a Pfeifer to Kosch pass of 23 yards to expand the lead to 22-0 very early in the second period.

Allen then marched the field with a time-consuming drive only to have it die at the 7-yard line.

The Eagles then held the Flyers to a three-and-out, and again marched the field inside the Flyer 10-yard line, only to have the drive die on downs.

St. Francis, up 22-0 with only minimal time left in the period hit a pair of 33-yard passes to increase its lead to 28-0 at intermission.

Allen opened the third period with another lengthy drive, only again to have it stall inside the 15 of St. Francis.

Classen appeared tackled when a second Eagle tackler knocked a second tackler off Classen.  Again, it appeared to be a domination with St. Francis up 34-0, but Allen again drove the field.

Joe Grone hit Ty Krommenhoek from 33 yards and the lead was cut to 34-7 late in the third period.

The Eagles and Flyers traded possessions in the latter part of the period into the fourth quarter.

Allen forced another three-and-out, but fumbled the punt, allowing St. Francis to score from inside the 10-yard line to go up 42-7.

Allen, playing its’ last game before entering a co-op with Emerson-Hubbard next fall ended their storied history with a long drive capped off by a Gabe Reinert 3-yard run.

Offensively the Eagles rolled up 190 yards on the ground compared to 140 for St. Francis, and 41 of St. Francis’ yards came on one play in the third period.

St. Francis out gained the Eagles in the air 147 to 59, 66 of that total for the Flyers came on two consecutive passes late in the second period.

Gabe Reinert and Joe Grone led the Eagle ground game with 60 and 51 respectively.  Grone threw a touchdown pass of 33 yards to Ty Krommenhoek.

The loss, ended the Eagles season at 3-6.  The Eagles effort was tremendous, the result frustrating, considering the 1 vs 16 matchup, most would consider blowouts before the ball would be teed up.

“Our kids played their butts off tonight," long-time Eagle coach Dave Uldrich said.  "The team did almost everything the way it had to be done. The team had moments, when an assignment not executed correctly, allowed St. Francis to keep possession and or finish a drive."

"We on the other hand had those errors stop us from finishing in the end zone at least three consecutive times during the second and third period changed everything.  Nonetheless, credit to St. Francis."

"The coaching staff was very pleased with the team effort.  The team proved that they rightfully belonged in the field of playoff teams.  Congratulations to the seniors and balance of the team on staying the course during the season, and giving us their best effort of the season tonight.  Finally, to alum, parents, and former players at Allen, thank you for the tremendous support of our program over the past.”

More pictures from the game versus the Flyers can be found on the Republicans Facebook page: https://www.facebook.com/wakef...